Latest happenings on the Capital Markets

Although the first half of the year remained relatively quiet, some remarkable listing stories emerged, mostly from growing small and medium -sized companies.

Smart manufacturing company Arcure listed on the Euronext Growth market in February. Arcure develops solutions that combine 3D vision sensors with AI algorithms to enhance the autonomy and safety of industrial machinery. The company raised €7.9 million at IPO and achieved a reached €35 million market capitalisation, becoming the first listing of the year on the Euronext markets.

Belgium-based medtech company Sequana Medical made its initial public offering on Euronext Brussels, raising €27.7 million to finance its growth strategy. The company became the 41st medtech to list on Euronext markets, a sector that represents a significant peer group for investors trading on Euronext.

Beyond Euronext borders, entrepreneurs across Europe are also considering the Euronext platform to list their company. We welcomed three Italian companies to our Paris market this semester:

and EdiliziAcrobatica, the leading Italian company for safety rope access within the building industry. The Euronext Paris building façade was decorated to welcome the enthusiastic EdiliziAcrobatica team and management, who made the trip from Genova to ring the bell at the listing ceremony. Grazie a tutto il team!

On 7 June, Iceland-based company Marel, a global leader in technology-backed food processing, listed on Euronext Amsterdam with a public offering comprising 100 million shares. To further strengthen its strong growth, the company was looking for a platform offering a deep and global investor pool. Marel picked Euronext Amsterdam out of a select group of major international exchanges to strengthen its capital structure and provide a global currency for acquisitions.
Watch the video to hear Marel's CEO explain the company's story and why he chose Euronext.

Uniphar, a diversified healthcare services group headquartered in Dublin, listed on Euronext Growth mid-July, for total proceeds of €150 million. The listing is to allow the company attract new investors and capital from across Europe. 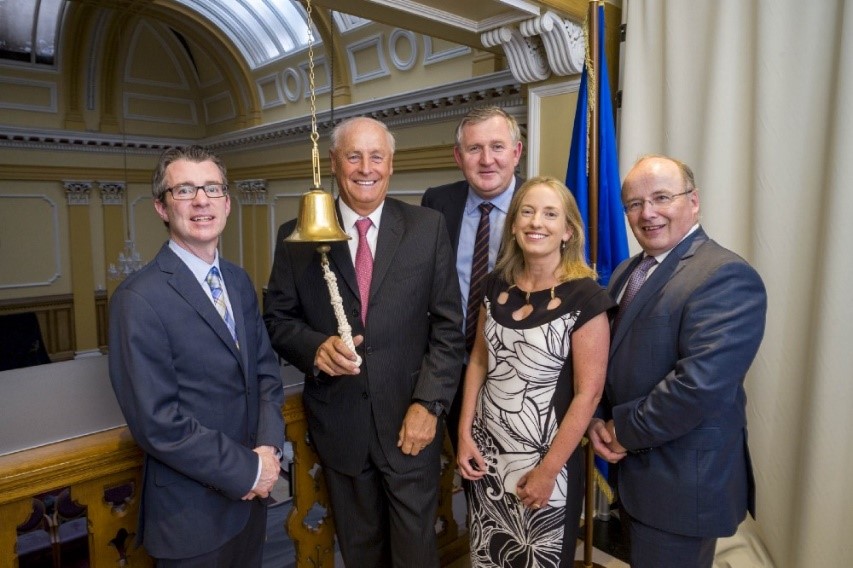 The stock exchange is not just about going public; on the secondary markets, activity has been driven by the need for financing from large corporates as investors have switched to assets perceived as safer. Some companies efficiently carried out follow-on deals to raise capital on Euronext markets.  Here are a few of the highlights:

Mergers & Acquisitions deals brought out impressive stories to the markets

M&A deals from Essilor (Luxottica), Covivio (Eurosic) and Takeaway.com were the largest financing deals this semester, raising €2.1 billion in total.

Private healthcare group Ramsay Générale de Santé announced a takeover deal on competitor Capio, which holds the leading position in Sweden and is a major player in Norway and Denmark. The Group made a €567 million public offer to finance the acquisition.

Online food delivery marketplace Takeaway.com listed on Euronext Amsterdam in September 2016, with a market capitalisation of around €1 billion. Already ranked as a Tech Unicorn at the time, it has kept growing (valuation estimated at some €5 billion today), and earlier this year acquired the German business of DeliveryHero for a total consideration of €930 million. The transaction was successfully completed in April 2019 thanks to a €430 million capital increase and a €250 million bond listed on Euronext.

Among the latest notable life sciences deals, two biotech companies have been active in the secondary market this semester. Biocartis, a Belgian biotech, successfully raised €55.50 million in a private placement.

French late-stage clinical company Nanobiotix made a private placement in April 2019 for €29.52 million to finance its next developments. The company, which listed in 2012, has made 6 offerings on the stock exchange since listing for a total consideration of €141.7 million.

The real estate market in the spotlight

This closes the chapter of the most interesting listing stories from H1 2019. The next ‘Inside Euronext Markets’ newsletter will bring you the next chapter of news on companies and their stories as they finance their business and future development through Euronext. Subscribe here.