Sif is a leading manufacturer of large steel tubulars which are used as foundation components for the offshore wind and offshore oil & gas markets. The company manufactures customised tubular components for offshore foundations, predominantly in the greater North Sea region. Sif is headquartered in Roermond, the Netherlands, with a production site of over 100,000m2 and 13 production halls, strategically located along a key waterway in the Netherlands.

In total € 112 million was raised. With a market capitalisation of € 357 million the listing of Sif is, so far, the largest this year, within the EnterNext scope.

Jan Bruggenthijs, CEO at Sif, said: “We are very pleased to have completed the listing process, resulting in a listing on Euronext Amsterdam which we celebrate today. Euronext provides a solid platform for Sif, it gives access to the capital markets and provides brand recognition and transparency. We would like to thank our investors for their trust in the company and its management and look forward to executing our growth strategy as a leading manufacturer of large steel tubular foundation components for the offshore wind and offshore oil & gas industries. We are ready for a life as a listed company.”

The company celebrated its listing on Euronext Amsterdam today by sounding the gong. Jan Bruggenthijs, CEO at Sif, was accompanied by Mr. Schmeitz, member of the founding family of Sif. 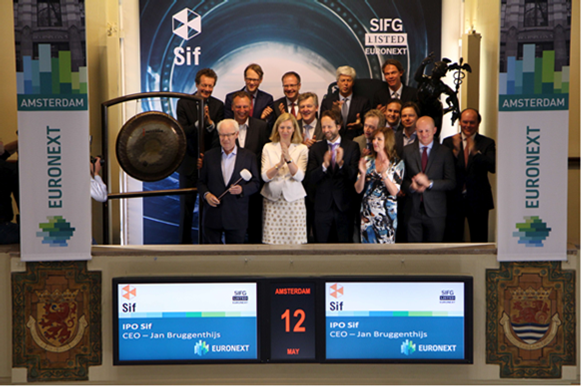 (*) EnterNext, the Euronext subsidiary dedicated to promoting and growing its SME market.

About Euronext
Euronext is the leading pan-European market infrastructure, connecting European economies to global capital markets, to accelerate innovation and sustainable growth. It operates regulated exchanges in Belgium, France, Ireland, Italy, the Netherlands, Norway and Portugal. With close to 2,000 listed issuers and around €5.8 trillion in market capitalisation as of end June 2022, it has an unmatched blue-chip franchise and a strong diverse domestic and international client base. Euronext operates regulated and transparent equity and derivatives markets, one of Europe’s leading electronic fixed income trading markets and is the largest centre for debt and funds listings in the world. Its total product offering includes Equities, FX, Exchange Traded Funds, Warrants & Certificates, Bonds, Derivatives, Commodities and Indices. The Group provides a multi-asset clearing house through Euronext Clearing, and custody and settlement services through Euronext Securities central securities depositories in Denmark, Italy, Norway and Portugal. Euronext also leverages its expertise in running markets by providing technology and managed services to third parties. In addition to its main regulated market, it also operates a number of junior markets, simplifying access to listing for SMEs.
For the latest news, follow us on Twitter (twitter.com/euronext) and LinkedIn (linkedin.com/euronext).